Is It a Problem If My Persian Rug Has Uneven Fringes? 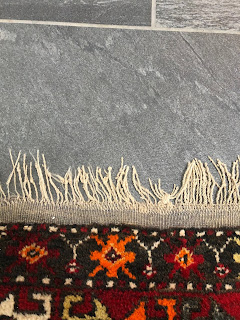 Before I continue to the main question addressed in this post, I want to note something about terminology.  Sometimes people refer to all hand knotted rugs as "Persian" rugs even if the rug is Turkish, Chinese, Indian, or even Central American.  When the word Persian is used to describe rugs,  the term is usually meant to refer to a type of construction (namely, that a rug is hand knotted) rather than a place of origin.  But of course, many Persian rugs do indeed come from Iran.  Terminology for rugs is actually quite imprecise so I thought that a small note would be helpful here.  Similarly, the word "Oriental" is still commonly used to describe rugs and other artifacts.  It, like the word Persian, is used to describe hand knotted rugs rather than a place of origin.
Now to address the question asked at the top of this post, namely, is it a problem if your Turkish rug (as the one photographed), Persian, or Oriental rug has uneven fringes?  The answer is: it depends.  Often, weavers will cut the rug off a loom in a somewhat imprecise way leaving a somewhat uneven fringe.  In those instances, an uneven fringe is nothing to worry about.  Other times, a section of the fringed area has been pulled or yanked by a vacuum, pet or something and in those instances it is not a problem unless you note the fringes are starting to come away from the rug.  If that is the case, that means that the fringe is failing and the edge of rug is vulnerable to further damage.  If the fringe is not coming away from the rug but is just a different length, it should not be a problem.  Shorter fringe is only problematic if it fails to protect the edge of the rug.  If the edge of the rug is vulnerable to damage, eventually the pile can start to come undone and rug restoration or rug repair will eventually be needed.
--www.traditionalrugrepair.com
Kosker Traditional Rug Repair
353 W 48th street, New York, NY 10036