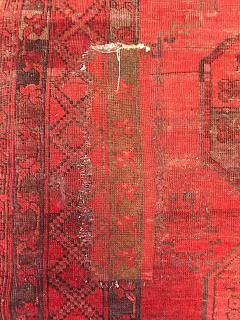 Occasionally we come across rugs that have been repaired in the past but need to be repaired again, or rather restored, due to the earlier repair's failings or an aesthetically unpleasing appearance.  The Afghan rug pictured above and below is an example of an old repair that might have solved an immediate structural problem, but ultimately was temporary at best and certainly detracted from the beauty of the rug.  This Afghan rug was repaired with a patch that was sewn into a section of missing pile.  The patch, while it was specifically woven for this rug, was not integrated into the original rug except for a superficial sewing around the perimeter. We have seen worse examples of this patch approach to repair/restoration, especially when the patch is taken from another rug altogether and therefore the motifs and colors do not blend into the original.   Sometimes restorers opt to repair rugs with a patch so as to stabilize a rug in the most cost effective way as this kind of repair work takes a significantly shorter time than a proper restoration (hours versus weeks if not months).  Our task for this project was to remove the old repair and undertake a restoration that would be integrated into the original structure of the rug rather than a mere sewing in of a patch.  Below are more photos of the patch that we were charged with replacing. 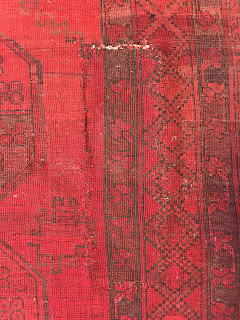 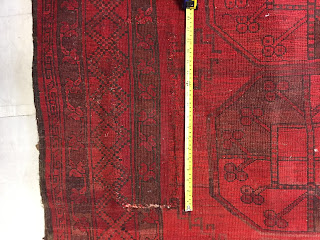 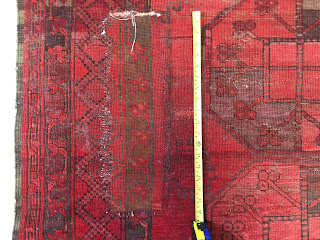 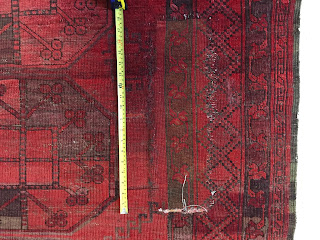 Note in the photo below how simple it was to extract the patch.  It was affixed to the rug only around its perimeter; it was never part of the original structure of the rug.   In our next posts, we will share how we restored this lovely Afghan rug.  ---www.traditionalrugrepair.com 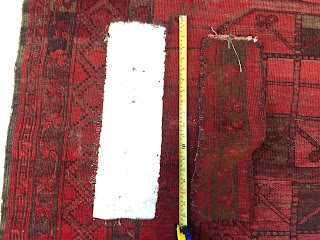