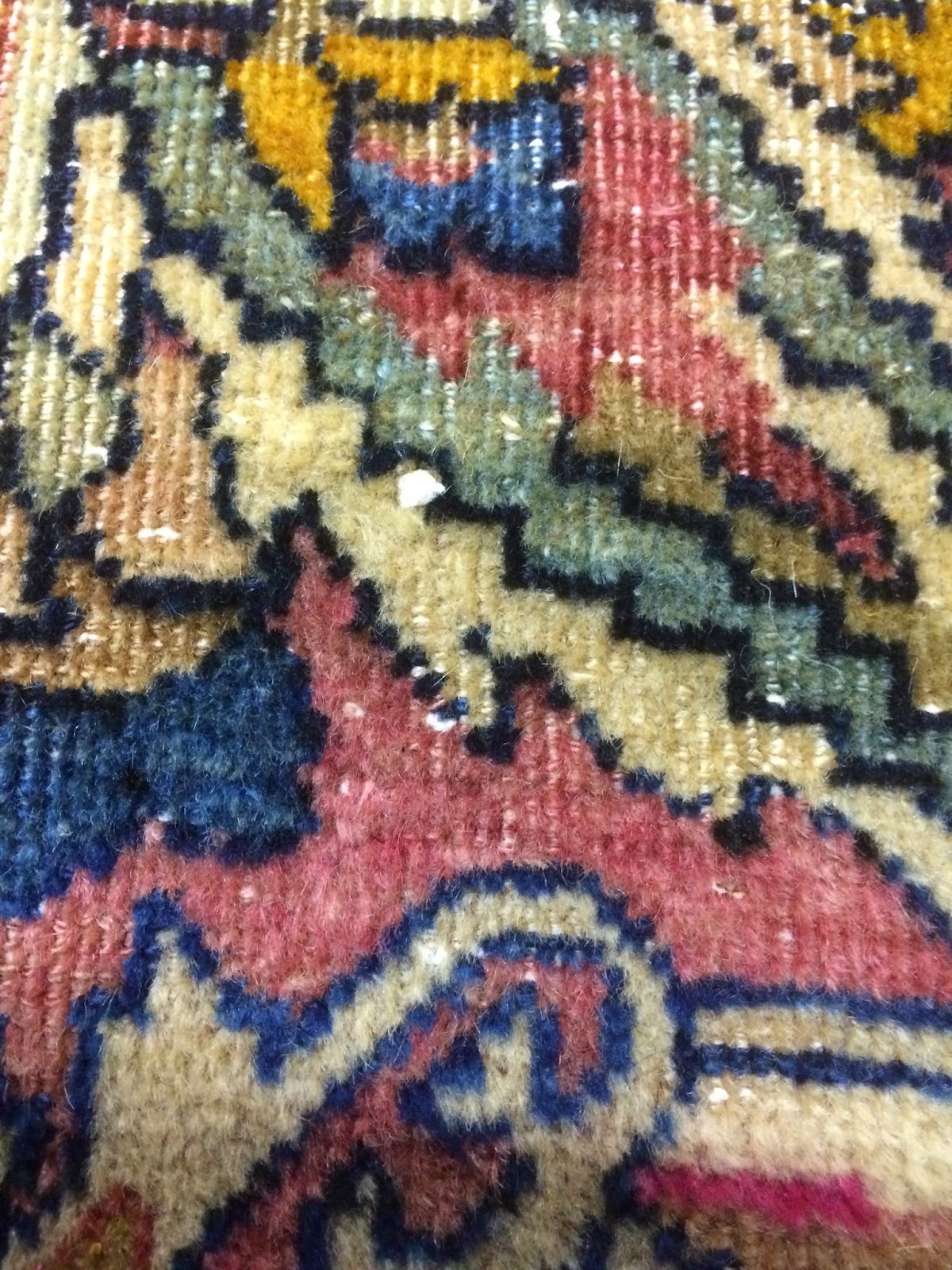 But why are those white knots in a rug in the first place?

White knots (which are sometimes different, less noticeable, colors) are usually a product of one of two things.  First, they are a byproduct of having limited available materials during the weaving process.  White knots are actually part of the warp of the rug.  Warp yarns are the vertical yarns which are affixed to the loom.  In the picture that I took below of a weaver in a village near where I grew up in central Anatolia, the white cotton yarns are the warp of the kilim that is being woven: 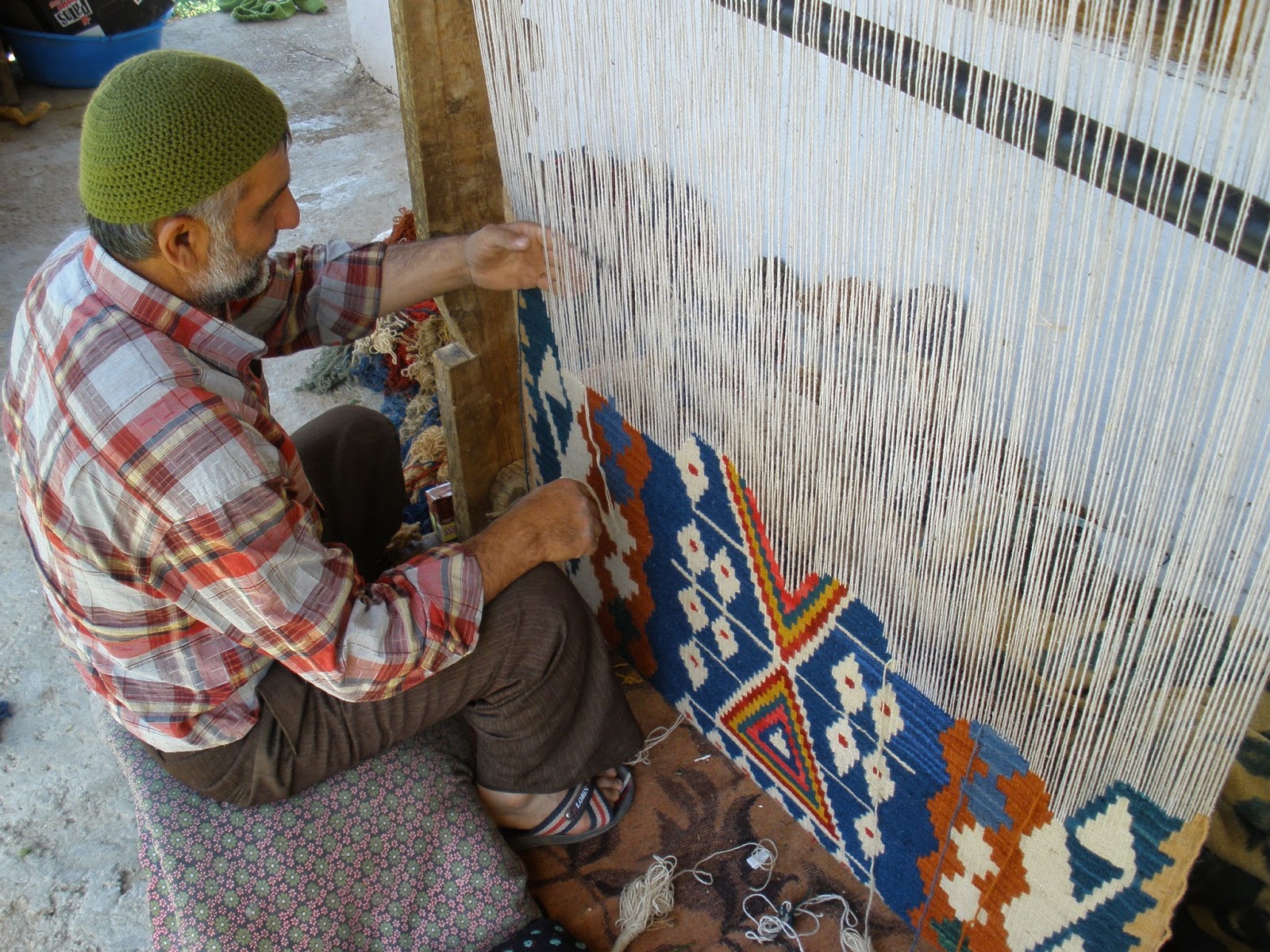 As you can see from the photo, quite long white cotton yarns are needed for the warp.  In a larger rug, the warp will obviously be even longer.  Sometimes, weavers do not have access to very long continuous yarns so they have to tie different strands of yarn together - thereby forming a white knot.  Sometimes the white knots are pushed to the back of a rug so that they are less visible on the face of the rug.  Other times they are left on the face of the rug but they are not noticeable because foot traffic soils the cotton so that it eventually blends into the field of the rug.  Other times the white knots are not visible because they are buried within the knots of a rug.  However, over the years when the knots - the pile - become worn (and therefore shorter), the white knots become visible.  They don't suddenly form - they were always there, but the shorter pile now makes them visible.

The second reason why a rug (or kilim) sometimes has white knots is because during the weaving process, the weaver pushes down her knots with a beater comb and by doing so sometimes tears the warp strings. When the weaver does this, she or he has to tie another warp string to the broken warp so that the weaving can continue.   Some view broken warp strings as a sign of a weaver's inexperience.  Others view broken warp strings as a sign of inferior quality of the warp's material.  The truth is that it would be impossible to weave an entire rug without occasionally tearing some warp strings or having to join a few warp strings together.  The white knots, therefore, are the inevitable byproduct of having a rug made entirely by hand.

What to Do When You Choose Not to Restore Your Beloved, but Damaged, Oriental Rug 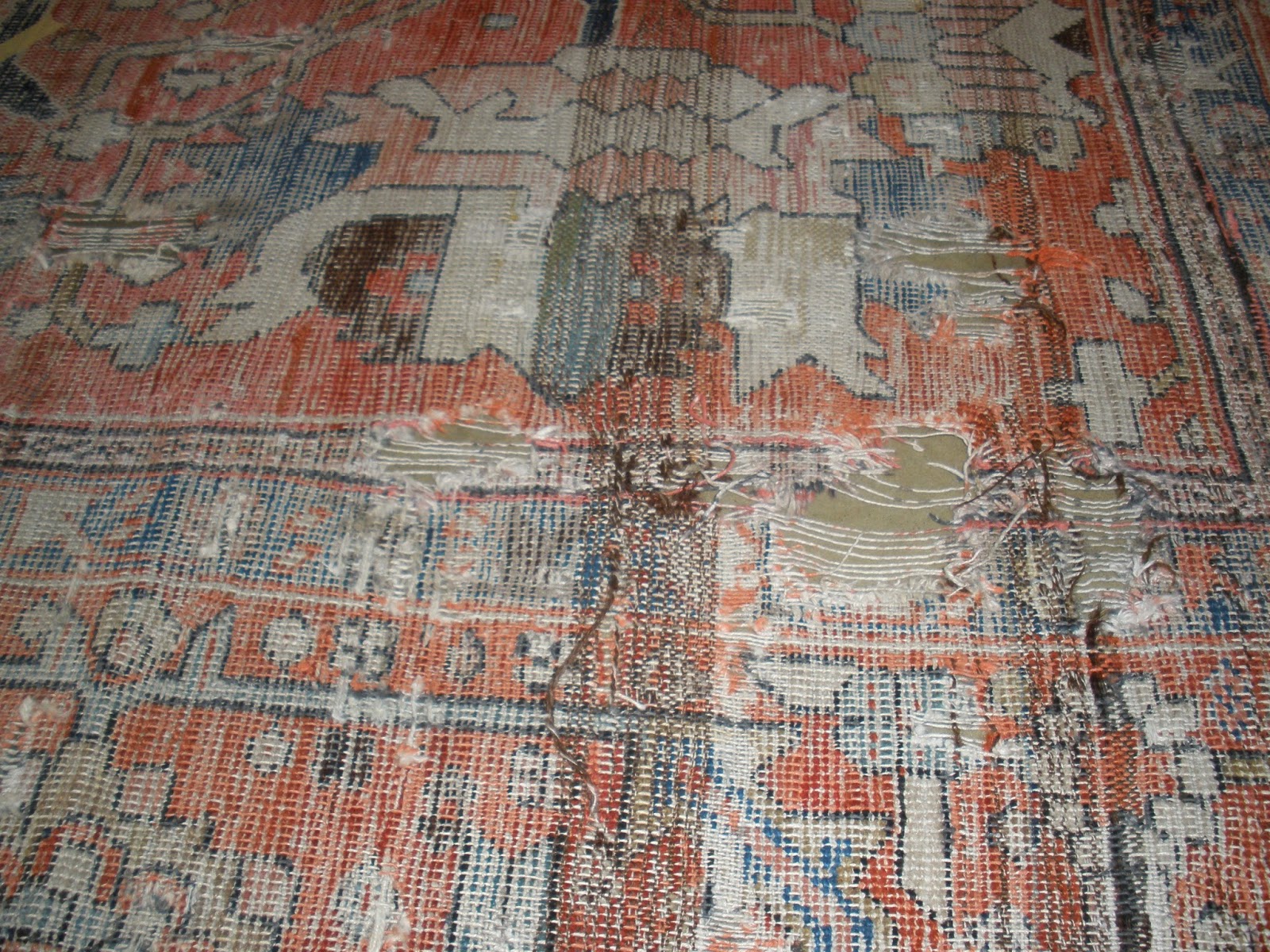 In our last post we discussed the various factors that go into a well considered decision against undertaking a full restoration of a damaged Oriental rug.  Although good quality handmade rugs can literally last a lifetime - actually, several lifetimes - there are instances when a full restoration of a damaged hand knotted rug is not prudent.  What can be done in those instances?  We have outlined in the past what options can be done to "recycle" the sound parts of rugs, but what happens when an owner wants to continue to use the piece as a rug and not as a wall hanging or furniture cover, etc?  In these instances, a more limited repair might be advisable.  Limited repairs on significantly damaged areas should focus on:

1.  Reinforcing all compromised fringes and selvage sections.  Generally, if a rug has a sound perimeter and it is not subject to significant stresses (such as high traffic or heavy furniture passing across its pile), a rug with a slightly damaged pile but sound perimeter can still last some time before it is too far gone.
2.   Repair any significant tears.  It is always ideal to restore tears so that the pile is reknotted in the style and manner of the original rug.  In a limited repair, however, merely sewing a tear can buy an owner some time (and save some money on the repair).
3.  Patch pieces from other rugs into existing holes in your damaged rug.  This is not a permanent solution by any means, but it can buy an owner a couple of years with their beloved rug.
4.   Sew a canvas backing onto a damaged rug.  This again is a temporary solution, at best, but it can provide an owner with some time with his or her rug without undertaking a costly restoration.

Note, however, that even these limited more modest repairs should follow a thorough professional cleaning if a rug exhibits any sign of current or past moth infestation.  Moth damage can happen quite quickly so regular periodic inspections of rugs is highly advised to prevent unnecessary destruction of beautiful sound rugs by pesky moths.   --www.traditionalrugrepair.com
Posted by Phone : 212 300 3348 at 11:12 PM No comments:

Is it Worth Repairing My Persian Rug? Should I Restore My Oriental Rug? 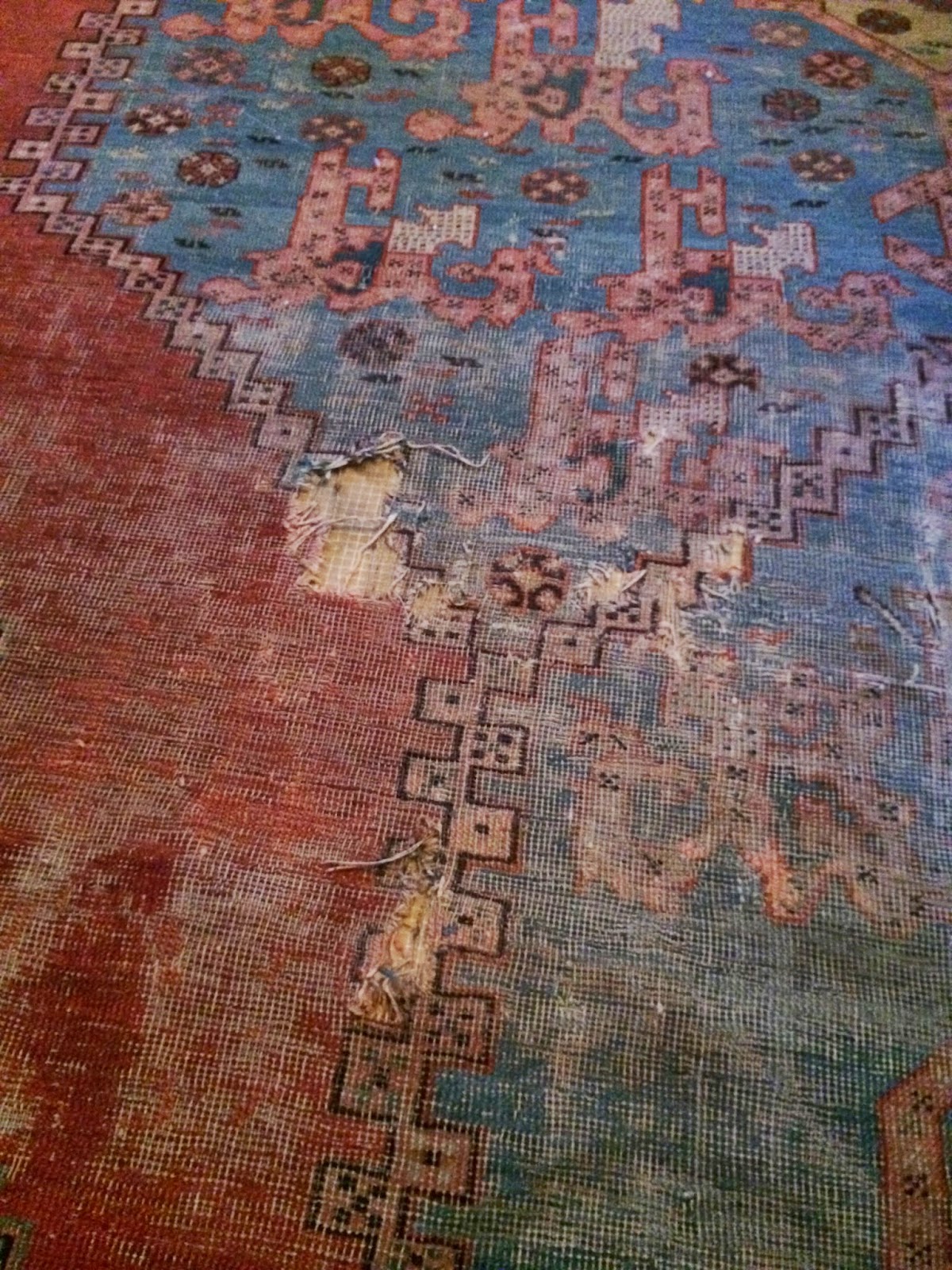 We get asked these questions at least once a week, if not almost daily.  Often, the people asking either have inherited a beautiful, but worn, Oriental rug, or the people have found a damaged, but lovely and well-priced rug to purchase, or the people asking are just examining a beloved rug that has stood guard in their house for years slowly losing areas of pile and levels of structural integrity.

Answering the question of whether it is prudent to invest money and time repairing and restoring a damaged rug is difficult, as the answer must consider a number of factors.  First, of course, there is the question of what is reasonably feasible.  While it is true that practically any rug can be restored, sometimes a rug is "too far gone."  This is often the case when a rug has been kept in an environment that is too humid or too dry, or the rug has been subject to moth damage for too long.  Second, there is the factor of the monetary element.  Sometimes a fine antique rug will increase in value with a good restoration and therefore a restoration can be seen as prudent investment.  Other times, however, when a decorative rug is very damaged or extensively worn, the time and money it would take to restore might be more than what it would cost to buy a new rug.  Third, there is the element of sentimental value.  This can be underestimated at times, but from personal experience, I know that I have spent countless hours, days, weeks, and months, restoring gorgeous rugs that belonged in my great grandmother's dowry - not because the rugs themselves are of high monetary value, but because their value to my family's own history is immeasurable.  For me, they are as priceless as any possession can be.  They are a testament to a great tradition - and a woven letter from my own ancestors - that I have the privilege of seeing and appreciating every day.  And which I hope to pass on myself one day.  --www.traditionalrugrepair.com
Posted by Phone : 212 300 3348 at 5:16 PM No comments:

Email ThisBlogThis!Share to TwitterShare to FacebookShare to Pinterest
Labels: Is it worth repairing my Persian rug, Should I restore my Oriental rug
Location: New York, NY 10036, USA
Newer Posts Older Posts Home
Subscribe to: Posts (Atom)