welcome to my new blog. 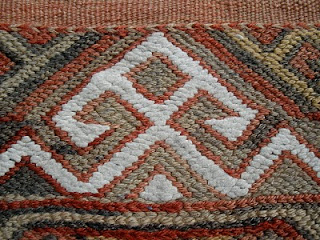 Welcome to my new blog. I am excited about creating a new forum to meet people, exchange ideas, and just generally share information about some of my passions in life - carpets, kilims, cecims, orchids, and antique watches. Nerdy, I know. But it’s what I grew up with and what I love.

So let me start today by talking about my first passion – the kilim. The word kilim, or “kelam,” literally means a letter or composition in the Arabic language. And the kilim itself is a letter, a woven letter, of various motifs filled with meaning, history, and hallmarks of an ancient tradition. One of the most popular motifs still in use today, and what is believed to have been the first known motif is known as “hands on hips,” an example which can be seen here.It represents female power and it’s believed to have been developed to symbolize the female role in reproduction (early Anatolians didn’t know that males have a function in reproduction, when that was discovered, the second known Anatolian motif was developed, appropriately called “the ram horn” motif). Usually the hands on hips and ram horn motifs are used together – they symbolize a union of man and woman, a joining of two great powers. I’ll take the next few entries to share more about kilim weaving, motifs, and dyes, but I’ll leave all that for the upcoming days.

If at any point anyone out there would like to share pictures of their kilims, please do so. I love to see what’s out there, what people have preserved, and what has made its way to different corners of the world. Thanks for joining me here – and I look forward to sharing much more with you all. - www.traditionalrugrepair.com